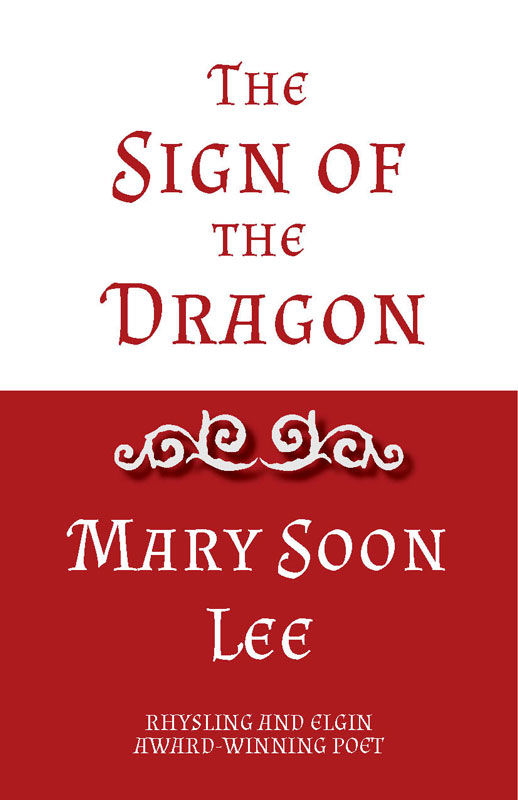 Winner of the 2021 Elgin Award, The Sign of the Dragon is an epic fantasy told in poetry. Of all the things I’ve written, it’s the one that matters most to me. It began with a single poem about a boy chosen by a dragon to be king. I meant the poem to be a standalone piece, but the boy stayed with me, and I returned and wrote more, and more, and more poems about him. Over three hundred poems in the end. (For the curious, the opening poem, Interregnum, appears below.)

Together the poems tell the epic story of King Xau. The story takes place in an imaginary world, but Xau and his kingdom contain Chinese elements, and there are also Celtic and Mongolian strands. The Chinese and Celtic elements crept in because my father was ethnically Chinese and my mother was Irish.

The Sign of the Dragon is available as an ebook with an illustrated print edition forthcoming. It was published during the COVID-19 pandemic, and I am currently donating any money I receive from sales to the following charities: Doctors Without Borders, Greater Pittsburgh Community Food Bank, and The Trevor Project.

Below is the opening poem, Interregnum, which won the Rhysling Award, or you can click the play button to hear me reading it.

Sixteen years old, fourth son,
still they sent him to the mountain

together with his brothers
before their father’s body stiffened,

the kingdom suspended without a king:
four princes, one crown

(a crown he had no use for,
a crown of war, alliances, duty).

He slept on straw near his horse,
displacing the stableboy,

waited for his eldest brother to return
triumphant, ready for the throne–

then brother after brother vanished
into rock and ice and cloud.

The steward took his sword,
his shield, sent him out at dusk:

no torch, no guide, no horse,
no servant, no food, no water.

Snow deepened under his boots;
he waded through drifts,

fell once, twice. The wind mocked him;
he thought of the warm stable,

the bed of straw, his horse,
sleep — but sleep meant death,

so he stumbled on. The wind
called his brothers’ names.

He shouted back his own name;
the wind laughed. Snow fell.

(she who was bartered for peace
to a man she’d never met).

He fell, pushed himself upright,
saw a black cloud speed against the wind.

She landed beside him, her breath ash,
snow steaming from her wings.

He knelt, but did not beg,
and asked after his brothers.

“One slept. One fought. One pissed
himself. They didn’t taste like kings.”

She laughed. “And you? What will you
pay for a crown, little princeling?”

“Nothing. I don’t want it.”
She flamed, and he saw himself reflected

in her scales, a kneeling, shivering boy.
“Then why,” she asked, “are you here?”

“Because they sent me.” He stopped. “No.”
He was so tired, he couldn’t think–

“Because the kingdom needs a king.”
He struggled to his feet.

“And what will you pay for the crown,
little princeling? Gold? Men? A song?”

about the woman whose name he cried
in his sleep. “Not a woman,” he said,

his heart on the mountain
where he entered his kingship. 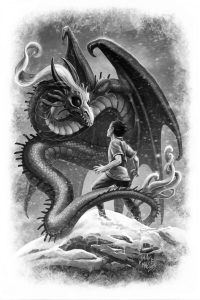 The above illustration for “Interregnum” is by M. Wayne Miller.